As one of the most famous sportswomen in the world, Lindsey Vonn is known for becoming the most decorated female ski racer of all time. But most people do not know about her struggle with depression which she hid from her family for 10 years, facing sexist comments, and how she plans to inspire young girls.

Vonn’s last race was almost three years ago. Since retiring in 2019 she has been busy with different projects but says nothing replaces the thrill of competitive racing.

“I’ll never get over not having skiing. I think I’ll always miss the adrenaline, the challenge skiing down a mountain at 85 miles an hour,” Vonn told Sky Sports News’ Gail Davis.

“I’ll always miss it especially when there’s an Olympics or World Championships. Those big, big high-pressure moments are what I really loved.”

Vonn is known around the world for success on the slopes but recently it is honesty about her mental health and depression which has created headlines. It is one of the main subjects in her memoir Rise: My Story.

“It was definitely a lot going on that I didn’t talk about or didn’t feel comfortable talking about,” said the 37-year-old, who has won 20 World Cup titles, from New York.

“I had depression for almost 10 years before I even spoke about it to family members. So there was definitely a lot going on.

“And I think skiing was my way to escape everything so in a lot of ways, I didn’t want to talk about it because I just wanted to kind of compartmentalise everything I think, as most people want to do.

“But as I found out, it’s not the greatest long-term strategy because eventually you have to face your demons. But it was a long journey and I really want to tell my story, just in the hopes of really inspiring others to overcome their own adversities.

“But I think we can all keep pushing forward and you just have to believe in yourself. And that’s really what the book is about.”

Part of Vonn’s sporting fairy tale has been recovering from big injuries on many occasions. One of her biggest lows was missing the 2014 Winter Olympics in Sochi because she was recovering from knee surgery.

Vonn’s injury list shows regular serious injuries spanning almost 15 years of competitive racing. She missed most of the 2013 and 2014 seasons.

In 2016 she had to be taken off the course in a sled after crashing in a World Cup super-G race. She has also talked about waking up from surgery to find she had lost function in her hand because of nerve damage.

Before winning a gold medal in 2010 at the Winter Olympics in Vancouver she had to overcome injury to her right shin which made putting on a ski boot very painful.

There was also a bizarre injury in 2009 when she sliced open her right thumb on a broken champagne bottle while celebrating her victory in the downhill in Val d’Isere, France.

But now she reveals how the serious injuries took their toll.

Vonn, a three-time Olympic medallist, said: “A lot of my depression in my career was instigated because of injury and being in bed for an extended period of time. And being on crutches for months, learning how to walk again and not knowing what’s going to happen.

“I think all of those things definitely contributed to deeper levels of depression to some degree, especially after my second anterior cruciate ligament surgery.

“And then I was out for two years and missed the Olympics. And I think watching the Olympics on TV was such a hard thing to do. It really took a lot out of me.

“And so I think what drove me ultimately was getting back on the mountain. And that’s kind of that was the carrot that was always dangling in front of me.

“That’s what kept driving me and got me out of my out of my depressive funk when I really needed it.”

Vonn says she got help for her depression after a friend, who was also a skier, suggested seeing a doctor. After some reluctance Vonn says she learned a lot about depression and used her sporting mindset to improve her mental health.

“As an athlete I looked at it as how do I get better at it? What do I do? What can I do to – not get over it – but to just find a way to still be the best person that I can be?

“And I think that was an approach that served me well. I was able to still accomplish a lot.”

For the American, who has won four World Cup overall championships, the danger is part of the attraction.

“That was the risk involved in skiing and especially in downhill. And I think that’s what made it so exciting,” she said.

“I’m not one of those people where I can’t watch my videos of my crashes. And I have videos of all my knee surgeries…that may be a little bit more extreme,” Vonn adds laughing.

‘People said I got sponsorships because I look pretty’

Vonn is a four-time Olympian and she competed at her first Winter Olympics in 2002 but did not win a medal in Salt Lake City or at the 2006 Games in Torino.

She won gold in 2010 at her third Olympics as she became the USA’s first women’s downhill Olympic champion. Vonn won by over half a second in Vancouver and also won a bronze medal in the super-G.

She also got a bronze medal at the Winter Olympics in 2018 in the women’s downhill at the age of 33. She regarded third place as a success because of the succession of injuries.

On February 10 in 2019 after competing at her eighth World Championship in Sweden, she won a bronze medal and then retired as the most decorated female skier of all time.

But during her career the American says she saw a “double standard” for elite female athletes as some people questioned why she received big sponsorships.

Vonn told Sky Sports News: “Generally speaking the biggest issue is when a woman’s successful and pretty it‘s they only get things because they’re pretty and that conversation would never be had on the men’s side.

“I think it’s hilarious that people – it’s not everyone don’t get me wrong – but there are people that think that throughout my career I’ve gotten sponsorships because I’m pretty.

“That’s why I have sponsorships – because I win. Not because I look differently. That frustrates me because it demeans my success as an athlete and my mindset. What I’ve done in my sport stands for itself.”

‘I teach girls they can be strong like me’

Vonn is one of only six women to have won World Cup races in all five disciplines in alpine skiing.

Since retirement she remains passionate about her work at her own Lindsey Vonn Foundation which tries to inspire young girls and help them to achieve their ambitions.

Vonn says: “I really want to empower young girls and help them understand how unique and beautiful they are and strong and that they can achieve anything they set their mind to.

“And it really isn’t anything to do with skiing. It’s just more in life whatever they choose they can achieve it through hard work.”

But Vonn says young girls who want to play elite sport still face barriers because of discrimination and sexism.

“So I try to teach those the kids that there they can be strong and they can be beautiful and to just be confident and believe in themselves.”

Skiing at three…to co-directing a documentary at 37

Vonn got her first taste of skiing at the age of three with her father and grandfather in Minnesota.

She competed in her first races at the age of seven, and took part in international competitions before the age of 10.

At the age of 12 Vonn’s family moved to Vail, Colorado so she could train and develop her ski racing for the whole year. The town is home to a ski resort and she has spoken in the past of the pressure and guilt of her brothers and sisters having to leave their friends behind.

With her high-profile relationship with Tiger Woods came even more publicity and headlines. In an interview with Sports Illustrated in 2018 she talked about having to develop a “thicker skin” because of all the extra attention, especially on social media.

In the last few months Vonn has stepped behind the camera to work as a co-director. When she was a child she met her role model Picabo Street who won an Olympic gold medal.

Now she has interviewed her childhood hero and helped direct and produce the documentary Picabo on the life of one of the sport’s great ski racers who inspired Vonn.

With lots of new work, Vonn says she is using strategies from her sporting career to succeed with her new projects.

“I just transferred now my goal setting and what challenges I have. I’ve just changed that into business and I’ve tried to find new ways to motivate myself.

“So those challenges are still there. It’s just not the same. It’s not as much fun to be on a computer as it is to be skiing down a mountain!”

The 2022 Winter Olympics in Beijing will be the first since her retirement and she says she is looking forward to watching other Americans and is “excited to be a cheerleader”.

Vonn is working as a primetime correspondent for NBC and wants to make a similar impact to swimmer Michael Phelps who worked in a television role for the Tokyo Olympics.

‘Strawberries and cream…what a combination at Wimbledon!’

The American is a “huge” tennis fan and has been pictured with some of the world’s biggest tennis stars.

She regularly watches tennis at Wimbledon. So what is her favourite British tradition?

“I can’t quite get behind the tea and the milk thing (adding milk to tea), but every time I go to Wimbledon and I have the strawberries and cream – that I can totally get behind any time!” says Vonn.

“That’s a great combination that we don’t have over here.

“Roger’s always my favourite. If Nadal plays I hope that he wins. 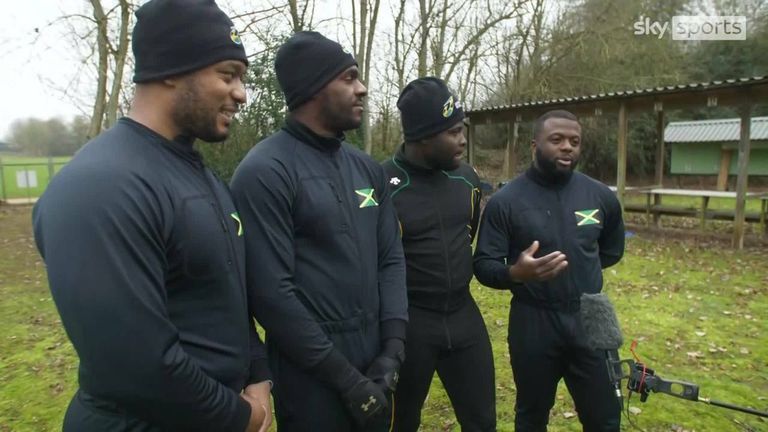 Jamaica’s four-man bobsleigh team of Ashley Watson, Matthew Wekpe, Nimroy Turgott, and Shanwayne Stephens will represent the country in the event for the first time in 24 years at the Beijing Winter Olympics

“Honestly, I’m a huge tennis fan and so Wimbledon is like one of my favourite places to go. It’s so beautiful and peaceful and just so classic. It’s such an amazing place and I love going there. I used to go there all the time.

“Hopefully, after this Covid thing is over I can get back to doing that.”

Thursday February 3 is Time to Talk Day and is designed to create supportive communities by having conversations with family, friends, or colleagues about mental health. You can find more information here.